Dr. Venkat Rayapati, Founder & CEO
While organizations view the development of next-gen technologies like AI and machine learning as the future of their business, cybercriminals, on their part, leverage similar autonomic computing techniques for malicious purposes. According to Dr. Venkat Rayapati, founder and CEO of Cyber Forza, the cybersecurity space has witnessed significant challenges in the past three years, from the earliest-known computer viruses and worms to the more sophisticated cryptocurrency-demanding ransomware, advanced backdoor malware attacks, hidden field manipulation hacks, and SQL injection attacks. “The challenges in the network security space have become more complex than ever and so must our standards of cybersecurity,” he says. Cyberattacks targeting the enterprise networks address multi-level and multi-layer cyber targets, resulting in enterprise network security breaches and major financial impact. To aid organizations in defending and protecting against such advanced cyberattacks, Cyber Forza developed its highly integrated Cyber Intelligent Cyber Security Software (CISS) to replace 20 silo products through a single product, which can interoperate with any existing security infrastructure in an enterprise network.

Having established the company in 2017, Dr. Rayapati and his team studied and understood three critical layers of an organization’s infrastructure that cybercriminals target while launching an attack: operating systems (OS), software-defined networks, and applications. The Cyber Forza team has built CISS, as an end-to-end network security solution based on their research and experience related to NASA, defense, satellites, networks, and microprocessors designs.

The CISS Platform provides cybersecurity professionals—CISOs and CIOs—a significant advantage to empower organizations in identifying, detecting, and protecting themselves against external, internal, and end-point attacks. “Cyber Forza’s products cover OS level, network level, and applications layers of the stack and support multi-level, multi-layer protection with ROI being observed within a year. Given that businesses across all verticals rely on critical assets, these products help in defending access to these assets to gain a competitive advantage, to drive revenue, protect shareholder value, and deliver cyber defense,” adds Dr. Rayapati.

Visibility into an organization’s network infrastructure enables IT administrators to monitor real-time data, internet sites, and applications that may increase security risks. As opposed to an identity and access management (IAM) infrastructure, the CISS Interceptor delivers an integrated network and infrastructure solution with a threat-centric IAM approach. Lastly, the CISS Forza Client offers end-point protection for connected devices such as laptops, smartphones, servers, desktops, cameras, sensors, and IT devices. This application works in tandem with CISS Defender to provide users with an easy-to-use and secure VPN environment for remote office branches, and visibility of internal threats. Cyber Forza also supports NIST SP 800- 171 framework compliance processes. 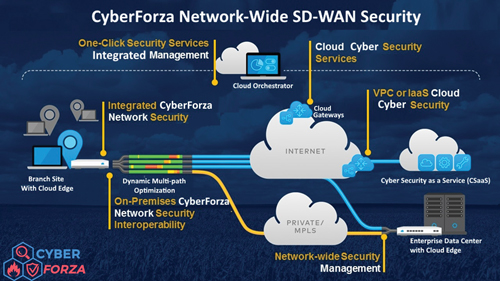 For Dr. Rayapati and his team, complete integration, breach detection, malware prevention, IP theft prevention, and NIST framework compliance are the most crucial objectives that they pursue while engaging with a client. With that conviction, “we developed the CISS to give organizations a one-stop network security solution that integrates with existing network architectures seamlessly,” he states. When a large airline organization that was using a prominent competitor’s security gateway noticed a hike in the frequency of successful cyberattacks, they realized that only 40 percent of their network was secure. After the implementation of the CISS Defender, CISS Interceptor, and CISS Forza Client software, the company observed fewer attacks on their servers and a substantial improvement of over 97 percent coverage in their overall security posture. Thanks to CISS’ intuitive integration capabilities, the company was able to keep cyberattackers at bay, and to this date, continues to subscribe to Cyber Forza’s solutions. The company caters to similar needs for organizations from the banking, insurance, pharmaceutical, healthcare, education, and retail verticals as well.

Plans for investing heavily in the further roadmap development of CISS products with adaptive AI and blockchain integration for the next five years are underway. “We are implementing lightweight blockchain technology into the IoT sector and integrating various types of IoT networks used in the oil and gas industry as well,” adds Dr. Rayapati. The company will be following their three-pronged strategy to develop security processes, improve the efficiency of security tools, and provide more extensive coverage for detection, identification, response, recovery, and risk prevention.