Patrick Morley, President & CEO Hiding in plain sight or under the enemy’s nose is a popular analogy that holds well in the current enterprise security landscape. Consider the Trojan horse—a decoy like most of the seemingly harmless files that creep into an enterprise network—which eventually led to the destruction of Troy. The unbreachable fortress of Troy, arguably similar to most enterprise security solutions, stood tall against the wrath of Greeks, untouched and unharmed until the Trojans found a wooden horse left behind by the retreating Greek army. Against all the odds and warnings, Trojans brought the horse inside the fortress, unknowingly letting a small, but fierce group of mercenaries into their fort. Thus, the sun set on Troy for the last time, bringing down an undisputed mighty empire.

Modern day enterprise and network security frameworks are no different; as comprehensive and robust as they are, a single oversight that lets a hypothetical Trojan horse into the network could lead to catastrophic failure even before sentinels realize what hit them. As a result, an all-inclusive network security portfolio, similar to the one developed by Carbon Black, goes a long way in bolstering an organization’s enterprise network against possible infringements and malware attacks.

The versatility of CB Predictive Cloud

According to a recent survey, endpoints are some of the highly volatile and most targeted assets within an enterprise. The study highlights that most of the data infringements, accounting to a staggering 50 percent, are a result of feeble endpoint security infrastructures. The survey assessed Carbon Black’s CB Predictive Cloud against similar endpoint prerequisites, only to determine that organizations could save a significant amount of financial resources while reaping benefits that outweigh the investments made. The researchers of the survey conducted interviews with a handful of Carbon Black customers and concluded that users who moved from traditional antivirus-based solutions to the next-gen antivirus (NGAV) and endpoint detection and response (EDR) obtained a return on investments (ROI) of 261 percent in three years.

The ingenuity of CB Predictive Cloud lies in how the platform collects data to check for malware.
Carbon Cloud refers to this methodology as an unfiltered assessment of data, as most attackers camouflage themselves to bypass network security counter-measures. Applying an unfiltered predictive model allows Carbon Black to stay ahead of the curve in terms of analyzing attacks that endpoint security frameworks miss out on. It discovers potential threats and attack patterns, doubling down on the root cause of malware infringements to analyze and overcome future hindrances. The CB Predictive Cloud enables endpoint managers to take immediate actions against infringements by visualizing them and combating them from a single console. On the operational side of the spectrum, CB Predictive Cloud eliminates the need for multi-vendor solutions that often increase the complexity of network security, in turn, reducing the capital expenditure associated with employing multiple enterprise security products. All in all, CB Predictive Cloud could be considered an omnipotent agent of enterprise security, encompassing a real-time response engine, NGAV, secure data centers, real-time query assistant, threat hunting mechanisms, and a continuous alert monitoring system, accessible through a single console.

Carbon Black’s portfolio of network security solutions is designed to abide by the principle of predicting and preventing a potential threat, as opposed to combating them in the hour of need. Case in point, the CB Defense suite utilizes predictive models to secure endpoint data, effectively preventing cybercrimes and uncovering suspicious activities before they mature into disastrous circumstances. It governs and stores a comprehensive record of activities occurring at each of the endpoints within an enterprise security framework and analyzes the signatures correlating to every action performed on these points of reference. The CB Defense suite then ranks and prioritizes alerts and suspicious activities over a period of time, visualizing multiple stages of an activity and the cause of potential attacks in real time. Network administrators, on the other hand, obtain control over these endpoints, subsequently isolating endpoints, applications, and processes for termination. 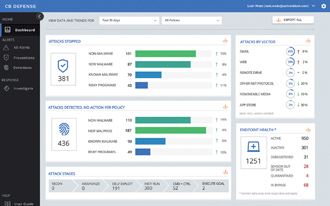 Carbon Black boasts seamless deployment of its network security suite, requiring less than one percent of disk space and computation horsepower at each of the endpoints. The company supports third-party integrations through its open API framework while also ensuring an impactful administration of external data sources with minimal effort. Such an approach streamlines auditing processes for organizations overhauling their enterprise security infrastructures. One such audit, wherein a client of the company grew alarmingly concerned about phishing mails and ransomware, led to a collaboration that cements Carbon Black’s unique value proposition in the marketplace.
By adopting Carbon Black’s CB Protection and CB Response suites—solutions designed under the company’s umbrella of specialized products—the client successful dodged ransomware attacks and phishing mails. Delighted by Carbon Black’s offerings, the client had this to say, “CB Protection is awesome. One piece of advice I would give to potential customers is to invest your time into this product - you can’t keep jumping from tool to tool. Carbon Black does a great job blocking everything, it is worth the time you put into the product.” 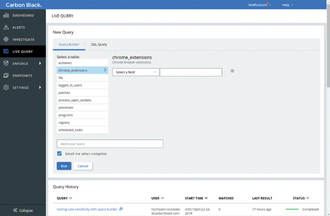 Carving a Niche in the Enterprise Security Landscape

Catering to numerous industry verticals, Carbon Black’s portfolio of network security solutions has earned well-deserved recognition in the marketplace. Its newest product, CB ThreatHunter, takes the incident response and cloud threat combat to a whole new level. With CB ThreatHunter, cyber investigation is reduced to several minutes, as opposed to solutions that require days or weeks to perform similar operations. The company’s solution suite details a series of actions, performed at each endpoint, scrutinizing the possibility of infringement across multiple stages of the enterprise hierarchy while uncovering loopholes that minimize any form of damage to enterprise assets. CB ThreatHunter empowers organizations to leverage Carbon Black’s indigenous ‘cloud-delivered threat intelligence’ and a blacklist of operations to hunt and quarantine malware. One of Carbon Black’s clients mentions that the combination of a rapidly searchable and unfiltered endpoint is a leap forward in terms of how network security infrastructures are deployed, governed, and scaled.

Carbon Black solves security hindrances from an enterprise standpoint, taking into consideration a multitude of security infrastructures. It has nurtured the CB Predictive Security Cloud platform to transform cybersecurity with an advanced breed of ‘cloud-delivered’ security solutions. As a result, 35 of the Fortune 100 companies, spanning across transportation, healthcare sector, media outlets, finance institutions, and government organizations entrust Carbon Black with their enterprise security needs. The company takes immense pride in its clientele comprising 4600 companies, collectively contributing to the growing cybersecurity landscape.

The Carbon Black team believes that their data-driven approach fundamentally differs from the rest of the solution providers as it provisions an unbiased, unfiltered, and localized endpoint security program. This was recognized by 500 of the top CXOs and industry leaders belonging to various organizations worldwide, honoring Carbon Black with the prestigious CXOHONOR accolade at an event held on the 10th of October, 2018. The company has reaped numerous such recognitions over the years for its consistency and reliability in network security solutions, enabling organizations to strengthen their security frameworks from the very foundation.